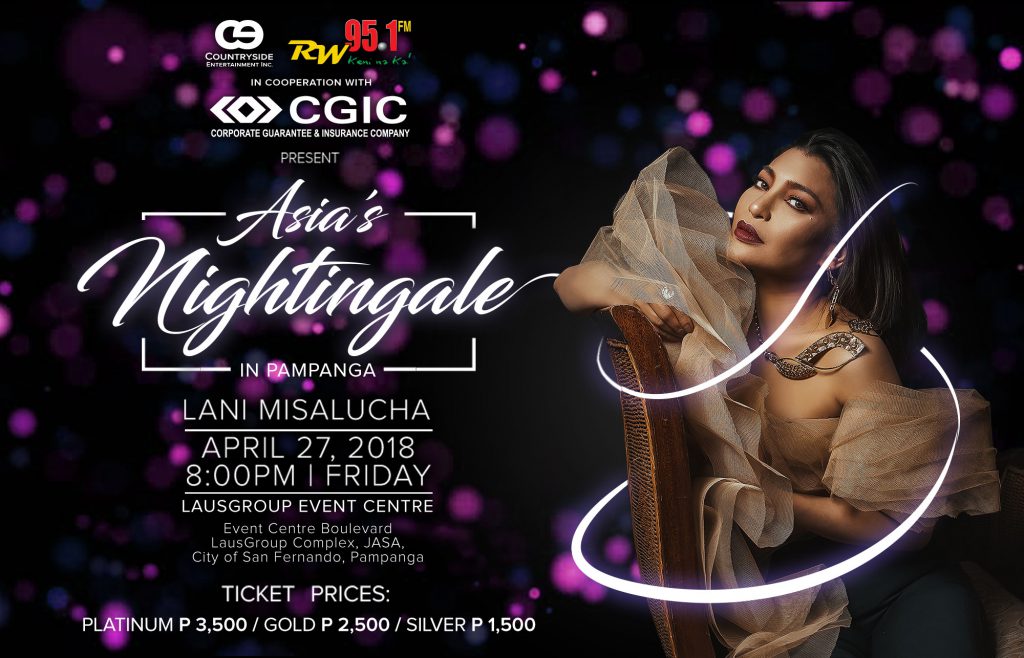 Countryside Entertainment Inc. and RW 95.1 FM gave you back-to-back awe-inspiring shows in the first quarter of 2018! This time, in cooperation with Corporate Guarantee and Insurance Company, we’re ready to bring more of the most sought-after local and international artists close to our Cabalens and Karehiyon!

With LausGroup Event Centre’s timeless grandeur and state of the art facilities, paired with its accessible location right at the heart of Metro Central Luzon, LGEC truly proves to be a premier landmark as it highlights another exciting show this year featuring one of the country’s homegrown world–class performers —– Lani Misalucha.

Previously dubbed “Multiplex Queen” and now internationally recognized as “Siren of the Strip”, Lani Misalucha has long been acclaimed for her versatility in singing across various genres including pop, rock, jazz, soul, rhythm and blues, and operatic arias; and has been able to capture the hearts of a wide and steady fan base here and abroad with her soulful voice and peerless talent.

The OPM icon became the first Asian to headline in a main showroom at the Las Vegas Strip. Her prominence in the Entertainment Capital of the World eventually earned her the title, “Siren of the Strip”.

This April, Lani Misalucha is flying back to the Philippines to perform her breathtaking melodies such as “Bukas Na Lang Kita Mamahalin”, “Tunay Na Mahal”, and “Malaya Ka Na” exclusively at LGEC.

Witness her Las Vegas kind of performance close to home! Let your heart and soul be mesmerized in “Asia’s Nightingale in Pampanga” on April 27 (Friday), 8pm at the LausGroup Event Centre!

Tickets are available at the LausGroup Event Centre Booking and Ticket Sales Office.  For inquiries and ticket reservations, please call 0998-959-2016.